My friend Alasdair does a huge amount of stuff, all of it well, but one of the best pieces of advice he ever gave was “watch the students”.

His argument being that students have a relatively unique combination of things – lots of time, access to resources, and little money. These, when also spending large amounts time around friends with similar interests (and alcohol, which probably matters quite a lot) can create a very fluid and rapidly innovative environment, without the restriction of thinking that something’s not possible or feasible, but simply going out and doing what everyone else said was impossible. But this is not new (#6). 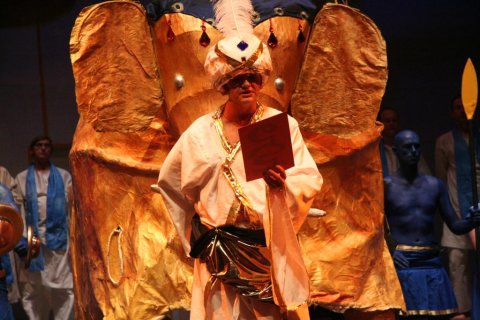 The balance of time and money being that way round, means that much is made of little resources, and things are reused in novel and interesting ways to get things done (Emily’s “fairy’s well” to the right is made from a recovered large cable drum and few space pieces of wood). Other people make elephants and paint themselves blue but it might astound you just how cheaply things can happen, and just how many organisations will lend you incredible things if it’s to be part of a student event.

There are few other similar environments where such ideas can be germinated, fermented and then carried out with ease.
The usual case of this can lead to some absolutely fantastic experiences.

But every silver lining has a dark cloud when we apply it to our usual themes of technology and democracy. Taking a look at London Met Students’ Union, which has had to abandon their elections after their “online elections” was subject to widespread fraud (outcome, details)). Details are scarce, but it appears that someone voted many many times using other people’s online voting credentials (no, they’re not secure). While they traced many of the votes back to a small number of IP addresses (because the abusers haven’t heard of tor?) they had no way of telling who was preventing from voting as someone had already voted as them. The entire election had to be abandoned (and will be rerun near Christmas – leaving students without elected representation for 3 months). Essex had the same problem around the same time which lead to the result changing after it had been announced (almost deja vu — paragraph 8 — re: scotland).

While, in the grand scheme of things, student union elections don’t matter that much (unless you’re a student in that institution needing representation – which can be vital to an individual student’s degree), the fact that they can be thrown quickly, repeatedly and with devastating results is a problem whatever the level. It’s also where the politicians start their politiking; and if they don’t care that “online” elections can be thrown at that level, what makes you think they would they care at higher levels.

Being able to spend time to develop and implement new and novel ideas is an extremely valuable thing. But to get a silver lining, you need a dark cloud.